Inspired by the glories of the Evolutionary Psychology Bingo Card, found at Punk Ass Blog, I have created the Women in Mathematics bingo card! 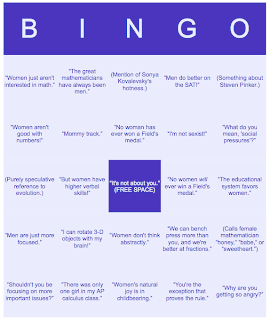 
For the record, I think the underrepresentation of women in math is a complex and fascinating issue. I don't think that there's a vast conspiracy of sexist male professors, who are actively working to keep women out of mathematics. Nor do I think gender parity is necessarily a good or attainable goal, in mathematics or in any other field.

On the other hand, I've had some pretty frustrating conversations about gender and mathematics, mostly with young, male mathematicians. I'm tired of the casual misogyny, the intellectual laziness, the blatant male privilege, and the spurious references to evolutionary psychology. This bingo card is my response.